As of today, the all-consuming, gaping vacuum left by the departure of Lebron James from the Eastern Conference leaves the Boston Celtics sitting pretty, on top of the East. Currently, according to VegasOdds, the Celtics have a 5/1 odds of winning the 2019 NBA championship. The next Eastern team is the Philadelphia 76ers, placing with a respectable 10/1 odds of bringing home the chip (pre-Kawhi trade). These odds are encouraging knowing that the Celtics are coming off the heels of the 2018 NBA season that saw a young core of Terry Rozier, Jayson Tatum, and Jaylen Brown lead the battle-tested Celtics into the Eastern Conference Finals and falling one game shy of the NBA Finals, all without the services of their two best players: Gordon Hayward and Kyrie Irving. It is difficult to imagine any other NBA team (omit: The Golden State Warriors) better positioned to win it all for the foreseeable future. However, what if it is possible for a basketball team to be “too deep” and have too much talent? No doubt, the Celtics talent-laden roster is destined to be lured away by other teams. Thus, the ever-increasing value of the Celtics rotation players could be a reason that Danny Ainge won’t be able to retain his assets in the coming years.

In 2019, the NBA salary cap is projected to be at $101 Million, setting the tax line at $123 million and tax apron at $129 million respectively. With their roster as currently constructed, the Celtics payroll is projected to be at $103 million (w/o Marcus Smart’s qualifying offer). Immediately, Kyrie Irving’s unrestricted free agent status (as he likely exercises his early termination option) and Terry Rozier’s restricted free agency status would be of imminent concern for the Celtics. Hypothetically, assuming Rozier continues to develop and is offered a contract between $15-$20 million annually and Irving accepts his 5-year $188 million max contract, Danny Ainge could potentially be committing an average of $34.6 million more to this backcourt than their salary as of the 2018-2019 NBA season. Accumulating such a substantial amount to the payroll would already vault the Celtics clear into the tax apron unless Marcus Smart and Marcus Morris (key contributors to the Eastern Conference finalists) leave the team. And this is all before the expiring deals of Jaylen Brown and Jayson Tatum are accounted for.

Luckily, for the Celtics, the availability of the mid-level exception means that the Celtics can sign players within a certain salary threshold that does not affect the Celtics overall payroll, depending on which tax bracket the team is currently in (e.g. tax apron, luxury tax, and room). Operating within luxury tax regions, the non-taxpayers Mid-Level Exception (a shade over the $8 million threshold) is available to the Celtics and could intrigue a high-profile role player to play for Boston; Nevertheless, it would be foolish to expect this addition to elevate the team above what they already have. While the future remains unnaturally, blinding bright for Boston, the gradual transition from now to the future may not be the smooth ride everyone envisions it to be. 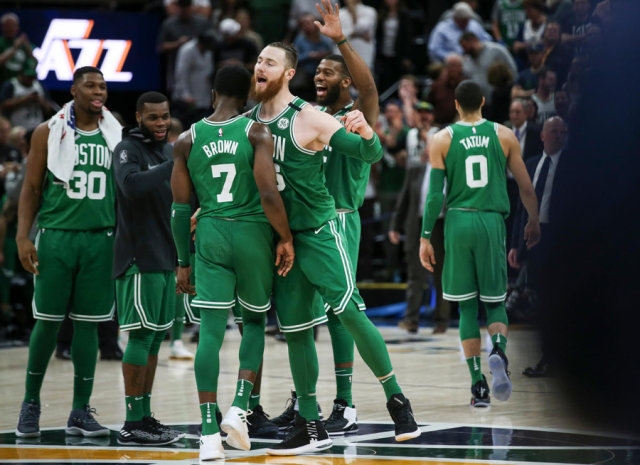 Clever signings by Danny Ainge has allowed the Celtics to potentially retain the services of Brown and Tatum without strenuous cap manipulation. Horford’s early termination option ends in 2020 (clearing $30,123,015) and Hayward’s in 2021 (clearing $34,187,085). This would mean that the Celtics would be able to consolidate a reasonable amount of cap space prior to the impending restricted free agency status of Brown and Tatum. Understandably, resigning Tatum and Brown would likely mean the Celtics would lack the financial flexibility to resign Horford and Hayward. Even if both free agents take a hometown discount, it is extremely unlikely that the salary of both Horford and Hayward would fit within the tax apron and below the hard cap. While the coalition of Irving, Brown, and Tatum would be a formidable core for the ensuing future, the Celtics would undoubtedly lose out on another dimension of offensive and defensive savviness from veteran players like Al Horford. And from what we have already witnessed in the 2018 playoffs, Al Horford’s consistent and clutch plays were pivotal in propelling the Celtics to being one game shy of making the championship round.

The Celtics have one of the brighter futures thanks to the wizardry of Danny Ainge. However, it is wise to at least acknowledge the pending crossroads the Celtics would face sooner rather than later. As such, the Boston Celtics team of 2018-19, and potentially stretching further in the 2019-2020 season, would most likely be the strongest lineup Danny Ainge could roll out. Thus, it is difficult to conceptualize a Boston dynasty as the aforementioned core of Irving, Tatum, and Brown just doesn’t strike as much fear as the nuclear duo of Ben Simmons, Joel Embiid or even a Warriors team that decides to run it back with the Western Conference All-Star Team.