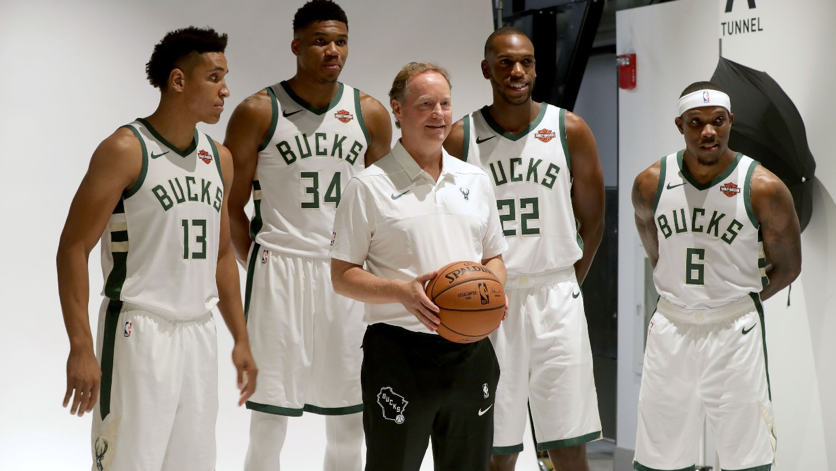 The Milwaukee Bucks has had an unprecedented start to the 2018-2019 regular season. They currently sit pretty with the second seed in the Eastern Conference and second overall in the NBA with a record of 44-14. Further indications of their regular season dominance are illustrated in the Bucks’ having the highest average point differential out of every team, outscoring each side by an average of 9.1 points per game. Almost a year ago, the Bucks sported a lineup consisting of four of the five players starting today; however, a coaching change and the signing of stretch center, Brook Lopez, has fully unleashed the long-limbed assault of Giannis Antetokounmpo.

Mike Budenholzer’s new offensive approach has revitalized the Bucks, catapulting the offense from 15th (2017-2018) to 2nd (2018-2019). By tapping into the unfairness of spotting four shooters around Antetokounmpo, the Greek Freak was able to assert his will through his tough finishes and rim-rattling, facial dunks. It’s no secret that Antetokounmpo’s albatross wingspan and athletic ability has contributed heavily to him becoming the best finisher – and, debatably, the best player- in the NBA today. His 78.1% conversion rate at the rim, made it difficult teams for teams to play him straight up, as he punished defenders down low with his ruthless and cold-blooded efficiency. Giannis’s dominance has directly led to the Bucks’ offensive renaissance, as double-teams often resulted in open three-pointers for lethal snipers on the perimeter such as Brook Lopez and Malcolm Brogdon.

Undoubtedly, the Milwaukee Bucks are experiencing unparalleled success in the NBA -only matched by the Toronto Raptors and Denver Nuggets. Nonetheless, when analyzing the future payroll of the team, it would be a difficult proposition for Bucks General Manager Jon Horst to materialize any scenario that would pair Antetokounmpo with more star talent. To start, the Bucks quintet of Antetokounmpo, Middleton, Brogdon, and (to a lesser extent) Bledsoe has proven to be indispensable in their success this year. Unfortunately, with roughly $82 million guaranteed next year – giving the Bucks $27 million in flexible cap space- the Bucks are expected to resign Middleton (player option), Bledsoe, and Brogdon (restricted free agent). Immediately, this cap straps the Milwaukee Bucks for the foreseeable future, denying them any ability to sign impact players on the free agent market.

Unfortunately, the poor projection of player future that has led to the massive, yet humorous overpay of marginal talents including John Henson, Tony Snell, Ersan Ilyasova, and Matthew Dellavadova has limited the Milwaukee Bucks’ ceiling as a team. The culmination of George Hill (traded for with Henson and Dellavadova in a salary-cutting move), Snell, and Ilyasova, and dead money (Mirza Teletovic, Spencer Hawes, Larry Sanders) constitutes 37% of the Milwaukee Bucks payroll as of 2018-2019 ($43.9 million). Furthermore, this payroll is expected to persist at least another year, assuming Hill’s contract expires and Ilyasova’s third year of $7 million becomes unguaranteed. It seems that once again the Milwaukee Bucks were a victim to the free agent market, as a dearth in three-point shooting on the roster forced Horst’s hand in handing glutenous contracts to Snell and Ilyasova. Still, it was of no help that former GM John Hammond signed Henson and Dellavadova to long term contracts.

Despite these past blunders, the NBA salary cap for 2019-2020 and 2020-2021 season is projected to be at $109 million and $118 million respectively, depreciating the proportion of these undesirable contracts relative to the cap space. However, the resigning of the Bucks’ current nucleus would serve to devour any financial flexibility Milwaukee hopes to have.

Still, barring a trade, the Bucks can investigate options of unloading Bledsoe ($15 million), who appears to be the least desirable out of the Bucks’ nuclear coalition due to his awkward fit in the system. Eric Bledsoe is an awkward wrench that jams the Bucks’ locomotive offense. His high usage pick and roll attack and below-average shooting (31% on three-pointers) not only takes away from Giannis’ usage rate but also could jam the lane with his poor sniping ability. Additionally, the opposing team tends to score better with Bledsoe being on the court, as opponent offensive rating jump from 107.3 to 109.5 (+2.2). On the other hand, despite the awkward fit, the Bucks offense surges with Bledsoe on the court, changing from 114.3 to 119.5 (+5.2).

Nevertheless, it would be tantalizing for the Bucks to embrace the same lineup approach as the 76ers. Like Philadelphia, the Bucks can assess the value of pushing out a four-wing one center lineup, strengthening the teams’ defensive versatility and running the offense solely through their demigod. Therefore, this approach allows for Milwaukee to further pander towards their competitive edge: versatility, shooting, and long limbs.

While the Bucks can rely on internal improvements in Giannis and Brogdon, it simultaneously occurs during Lopez (30) and Bledsoe’s (29) athletic decline. Thus, the future of the Milwaukee Bucks can be summarized in one word: stagnant. Poor decisions to resign marginal players have hindered the Bucks from making a splash in impending free agency and, ultimately, building upon their already potent core. This stagnation would no doubt play a role in Giannis’s choice to resign, as he would likely have to run it back with this familiar core of Bledsoe and Middleton not getting any younger. Still, Milwaukee Bucks fans can have solace in the fact that they will root for this team for at least the next three years. Which would not be so bad, Bucks fans can say they have it better than 97% of the league.